Continue to checkout
-or-
Your Account
Free shipping on all orders. Free RM24 shipping on orders over £39.99. Same day dispatch before 3pm (Mon-Friday).

Fake Nitecore i4 - Teardown and Comparison

Fake Nitecore i4 - Teardown and Comparison

Apologies for the delay! Its been a busy week and I've been keen to get on this but the needs of the business must come before the explanation of a competitors failings!

Before i go any further, these findings are based on products we have been sent by customers who purchased them in good faith from a competitor business and the views, opinions and pictures are our own and are intended solely for the education of anyone who needs to be able to tell the difference between a genuine and fake Nitecore i4 charger.

So. Fake Nitecore i4 chargers. Nothing we haven't seen before. Nitecore are unfortunately a heavily counterfeited brand and this is nothing new in the grand scheme of things. I think this only gained the traction it did on Planet of the Vapes (Read the story here - Fake i4 Thread on POTV) and social media because of the way it was handled by the retailer in question. I won't go into it here. You can read all about it on Planet of the Vapes and make your own mind up.

Im not going to cover the plug in this. The plug was quite obviously not fit for purpose. It was a non EU standard, un-fused and totally ridiculous plug so we'll leave it at that. What i wanted to cover, are the differences in external and internal quality. I'm not going to go too far into things at board component level because i simply don't have the time, but i will cover what's needed.

For the purpose of this post, the chargers are orientated with the counterfeit on the left, and the genuine article on the right.

First up, the outside. 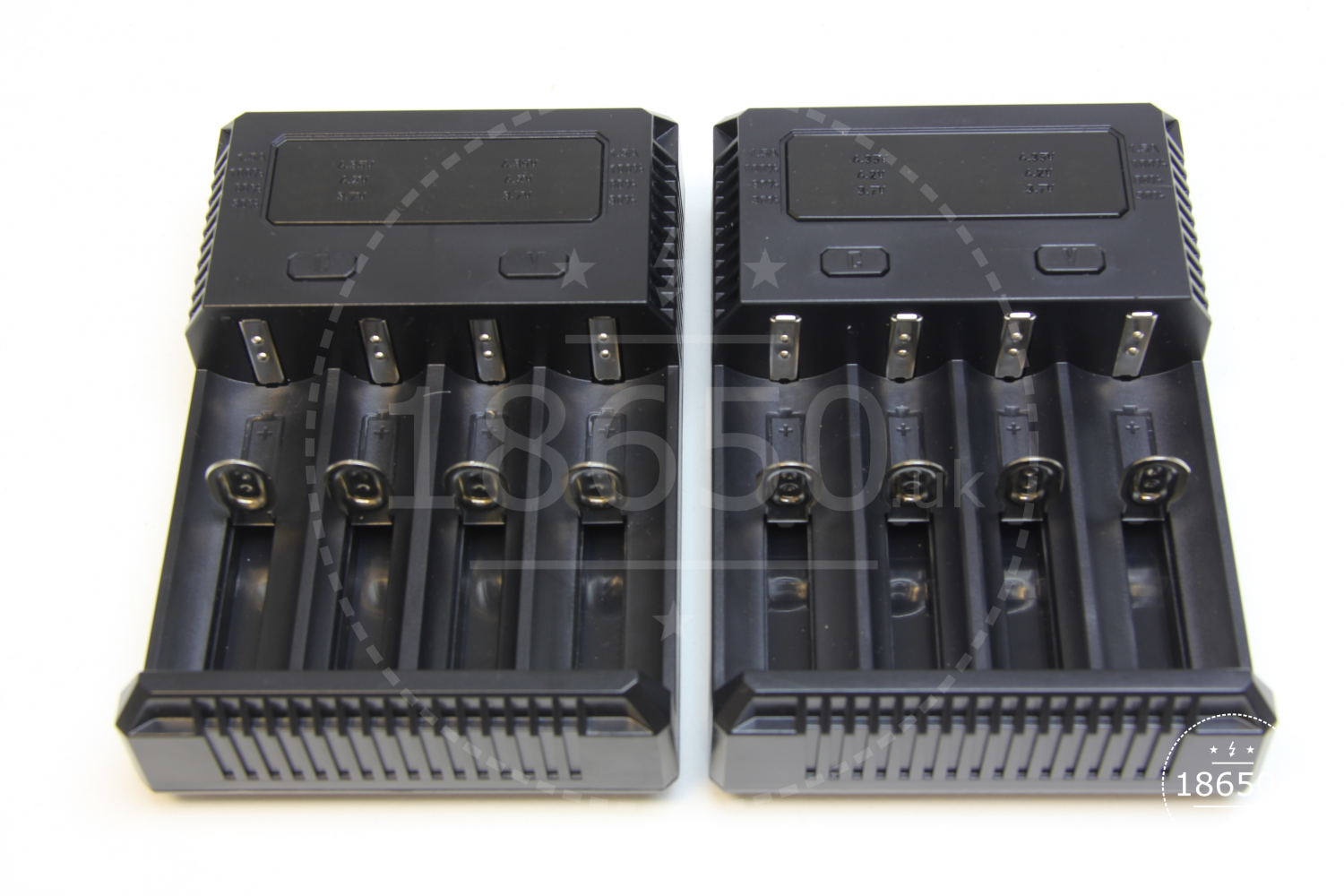 Notice anything? I immediately spotted a few things in customer photos posted on social media before i even had one to play with. The positive posts on the charger are too far sunk into the casing and don't sit flush with it either. There are gaps all around them, the genuine ones are a tight fit. On arrival, it's more pronounced than i thought. They're also very uneven wobbly. We'll see why later...

Embossing in the battery sled. They're very obviously different side by side. Thick lines and different "sized" battery. Yellow model designation bar. The font is very close but not quite right, but the boldness of the letters and the printing of the logo are definitely different.You'll also notice in this photo that the pins in the 240v input are longer on the genuine one. 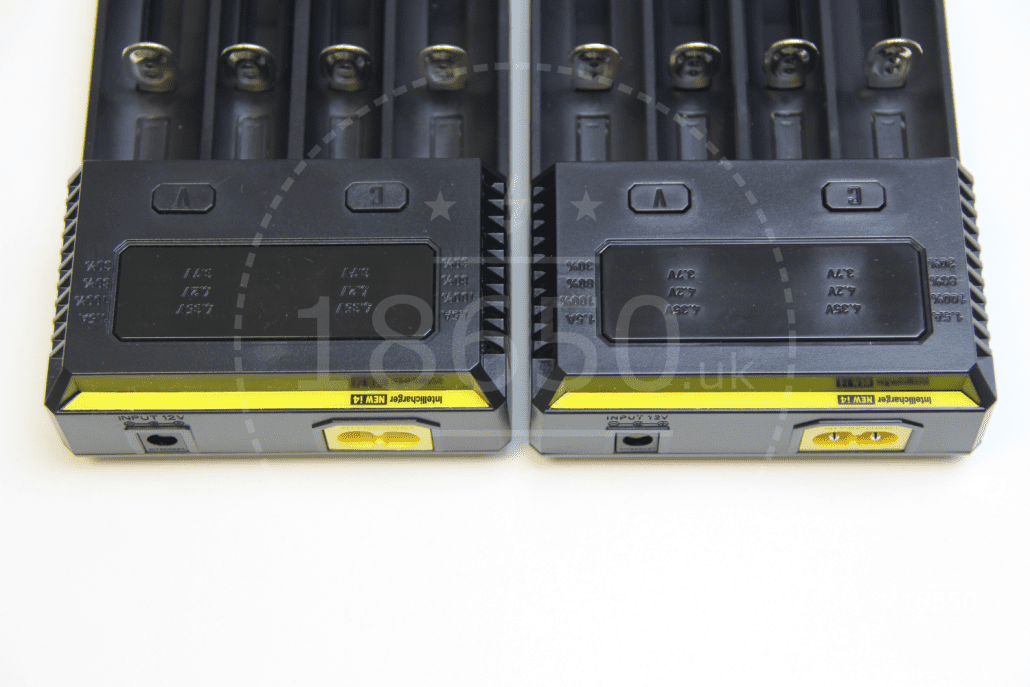 Low voltage (12v) input (black). The embossing on the non-genuine product is actually better! Deeper and clearer than the genuine product. Nothing to worry about, but an obvious difference and a sign they're not from the same tooling.

Underside - The genuine charger as you can see on the right, has a much glossier finish, a deeper looking black. The non-genuine product has a closer to matte finish. 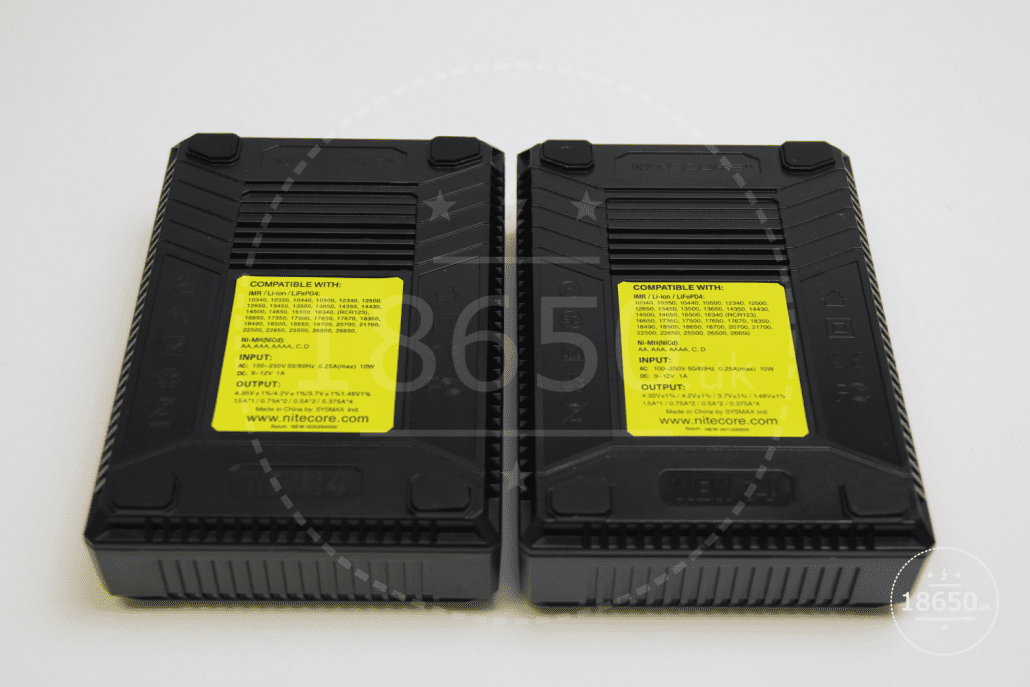 Inside is where i expected to find the most significant differences and while i wasn't wrong i found myself initially laughing at the state of it, then upset and angry at the quality of some of the work that was at one point, plugged into the mains in someone's house. 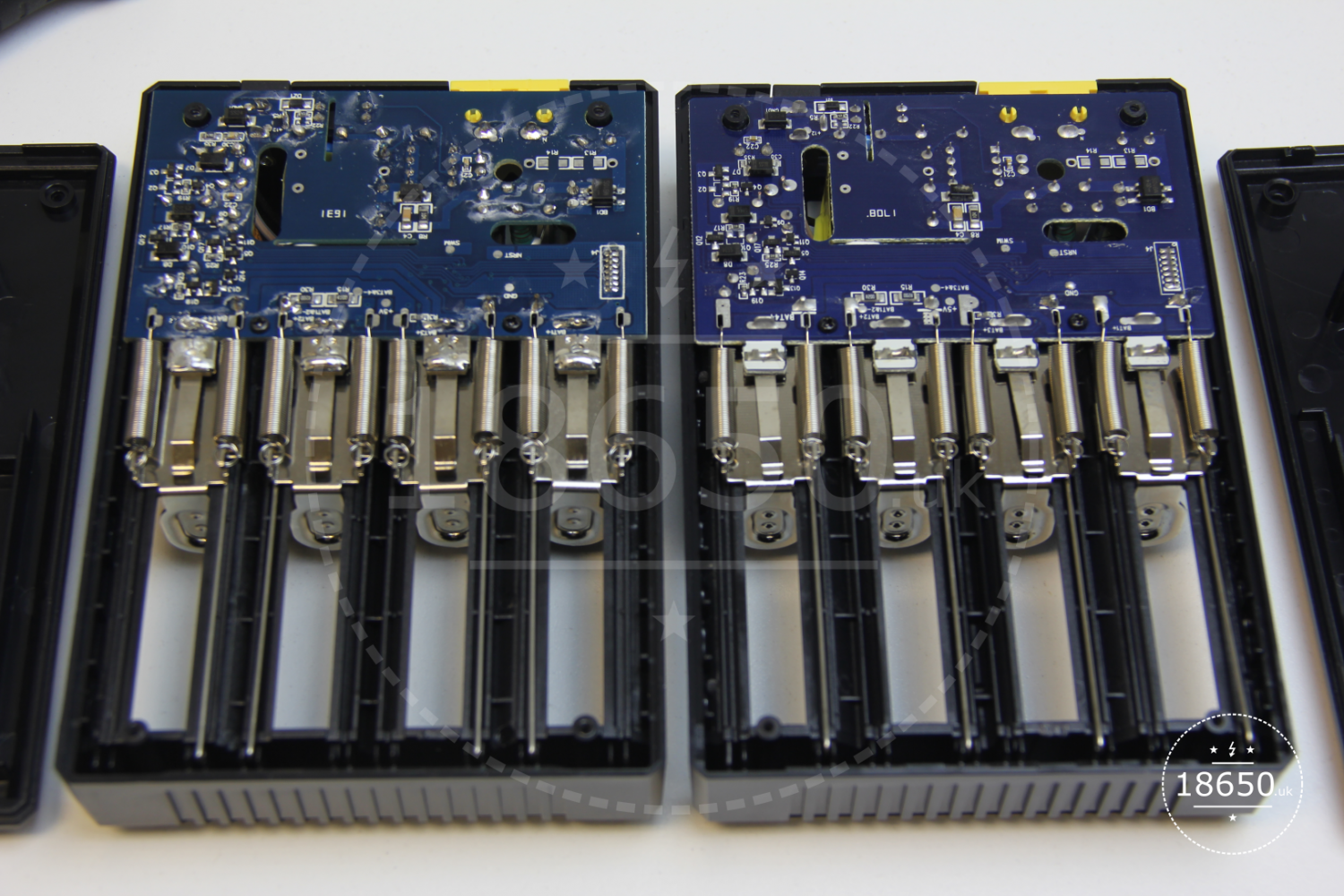 Bear in mind, none of these products returned to us exhibited any signs of imminent danger and the customers were only alerted to the potential danger and stopped using them due to the power of social media. The marks you can see on the board on the left are not burn marks from operation. They would have been caused in the component soldering process which at its very best is unbelievably shabby. I would be highly skeptical of anyone who tried to tell me these were done by machine in the same way the genuine ones are. The connections are barely passable, scruffy, and many of the legs of components have had to be manually snipped off, likely to get the board to fit in the casing. None of this is evident on the genuine product and would indicate to me a very manual production/assembly process.

From the underside of the board we can immediately see that they're different boards. This in itself isn't hugely unusual, manufacturers do make occasional changes however given how close together these were supposedly manufactured, it's an unlikely coincidence. As mentioned above, the quality of the soldering is very poor. It's functional, but not as tidy as you would expect. 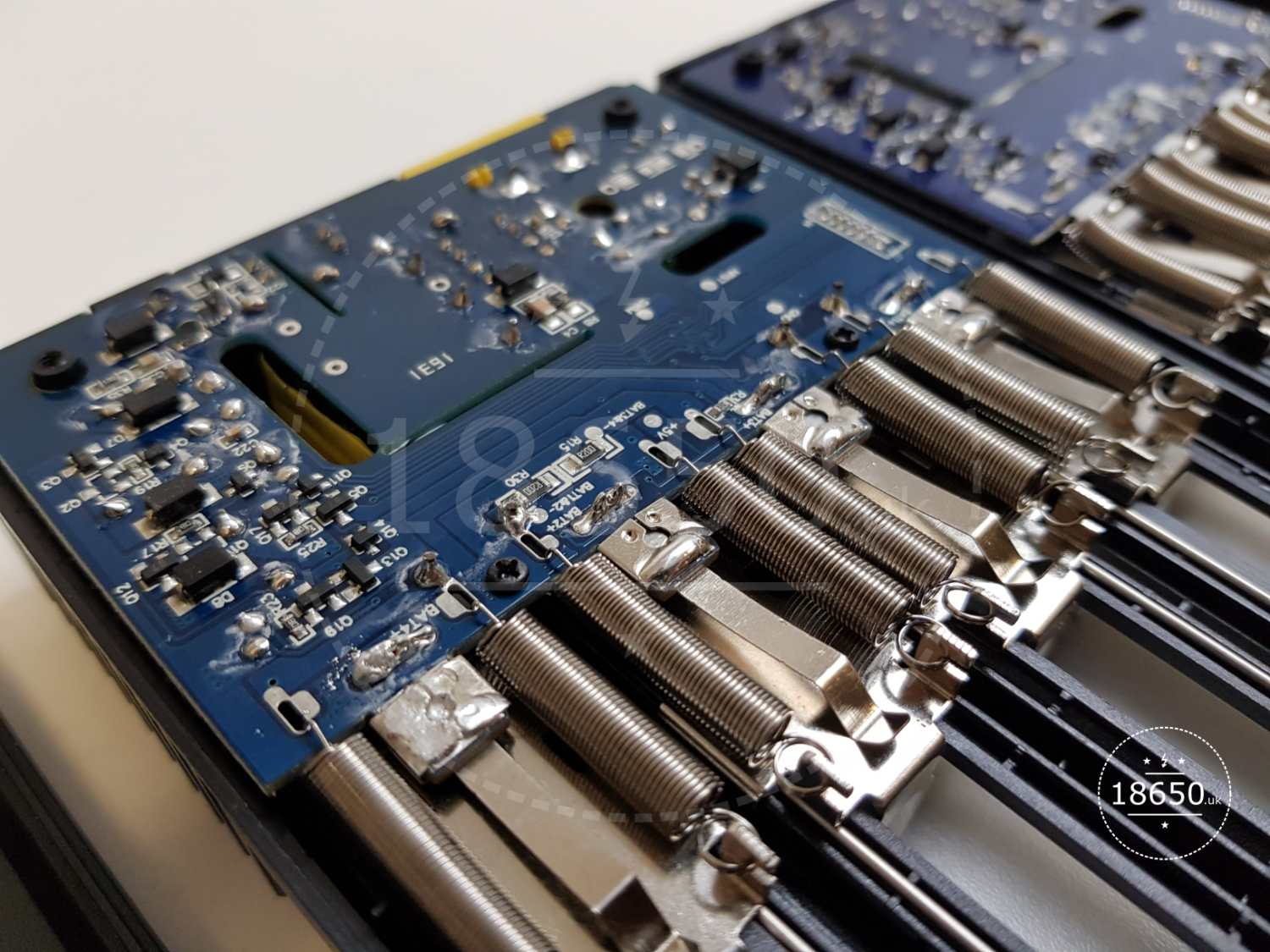 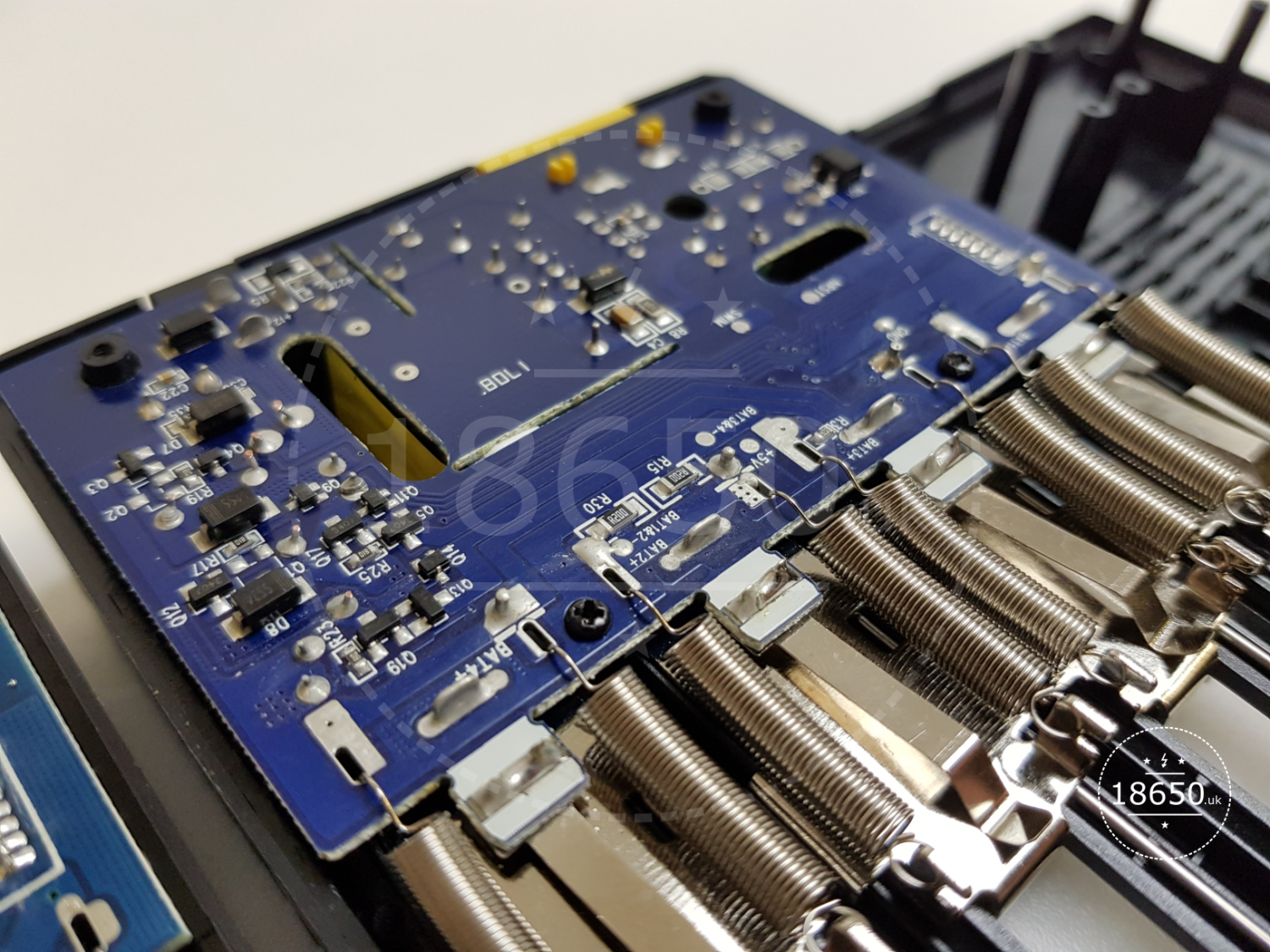 The negative sliders in the battery sled are different. Its very subtle (I've not tested the actual material they're made from) but they're not from the same tooling. Edge cuts, bends and finish are all different. Also, the spring bar for the sliding contact are attached differently to each board. The genuine ones appear to be nicely resistance welded to the board. The non-genuine ones are a wraparound design and are attached with an unsightly lump of solder.

Flipping over to the topside of the board, we are presented with more differences. Every single component is different. Even though the capacitors on the board on the non-genuine charger have Nitecore wraps on them and are the same (purportedly, basing this on the wrap only) rating/values, they're not the same components underneath which leads me to think that the counterfeiting goes down to component level too. The first thing that caught my eye was the low voltage input power side of the board. The genuine charger uses a single 1500uF capacity next to the transformer. The non-genuine one uses two 470uF ones instead. The transformer itself is different too. While the fake one doesn't have the previously seen "NITECOKE" wrap, it's marking is on the wrong side and its notably smaller. I've not stripped it further as there's no real need. 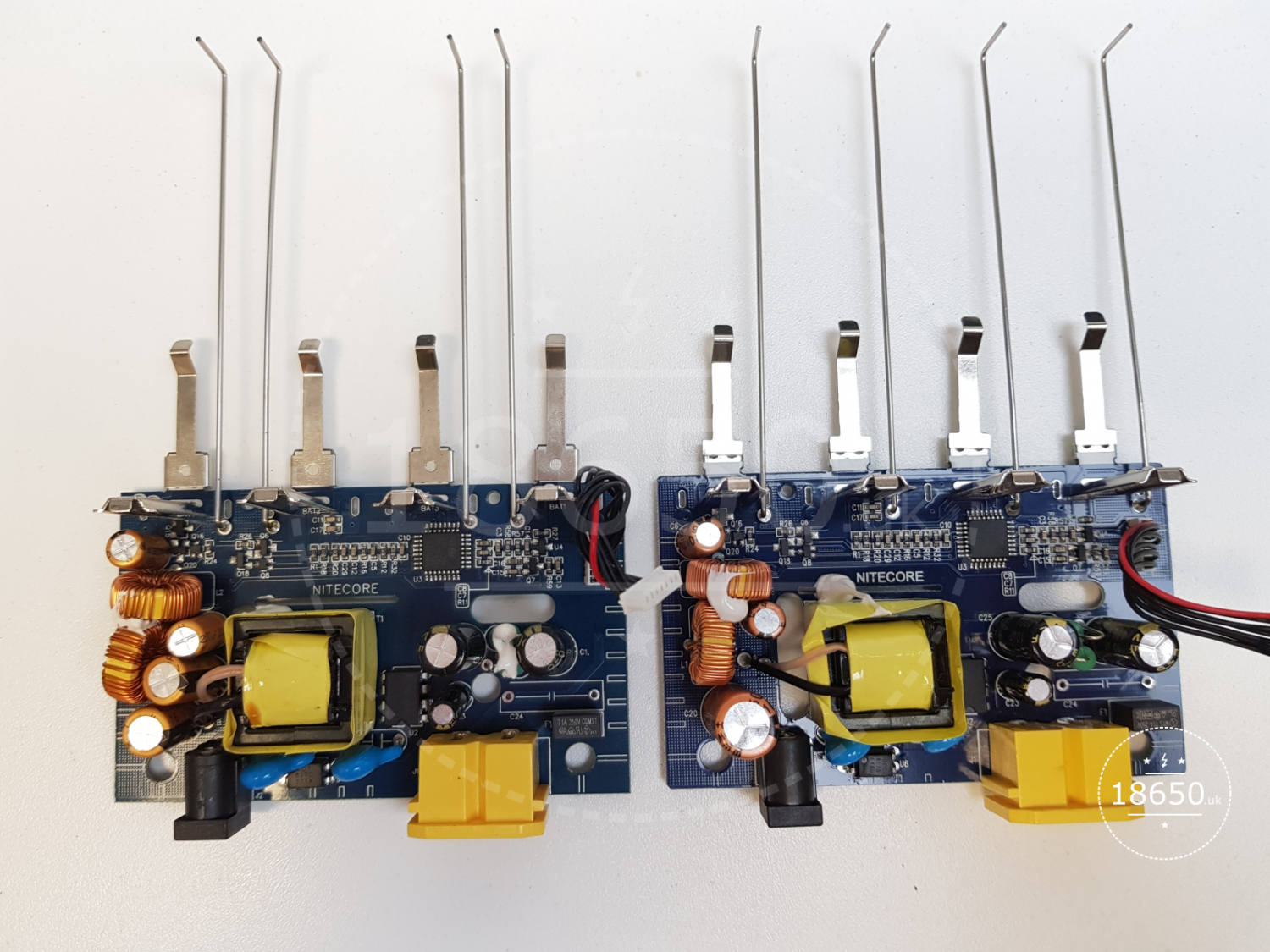 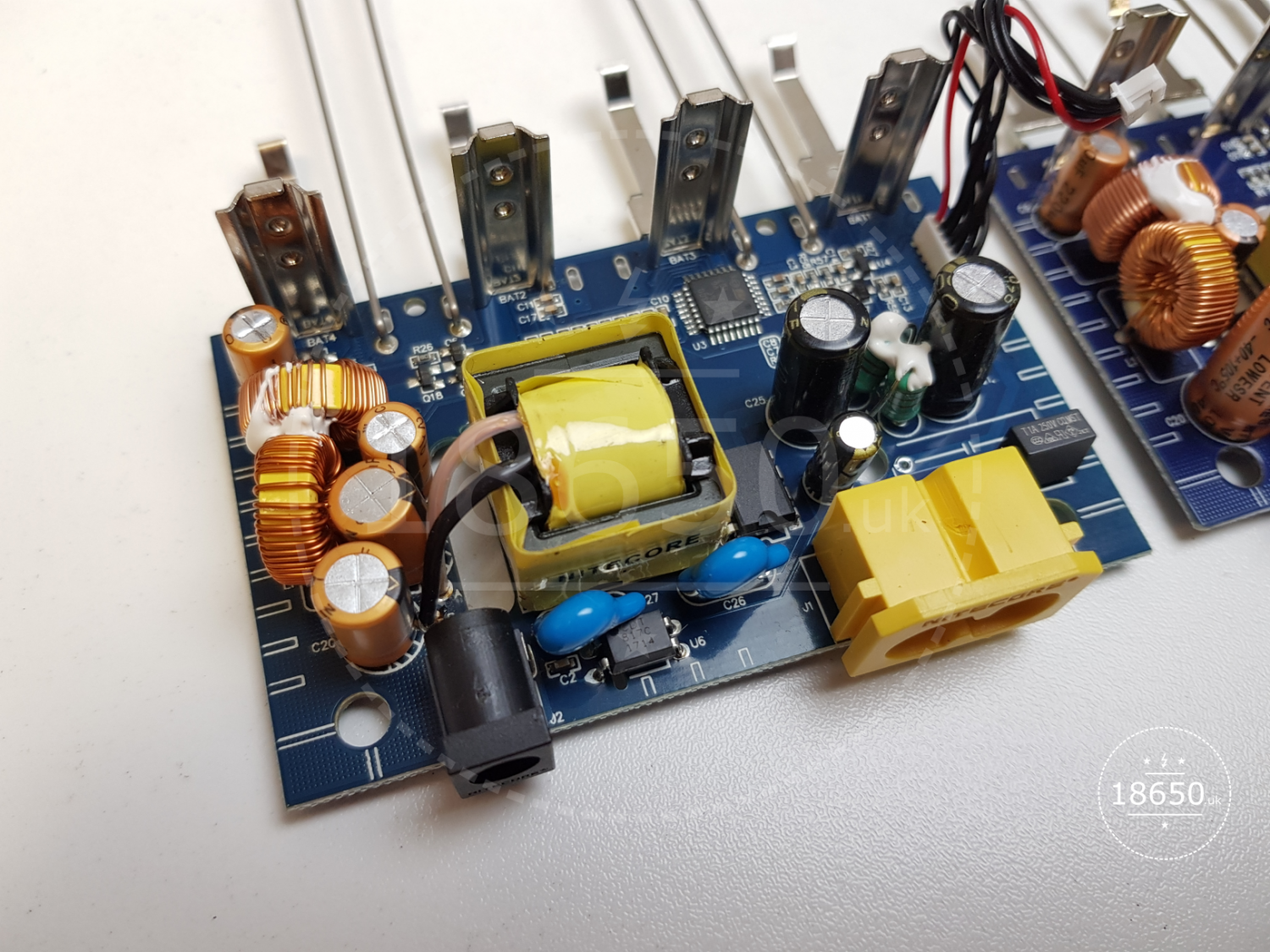 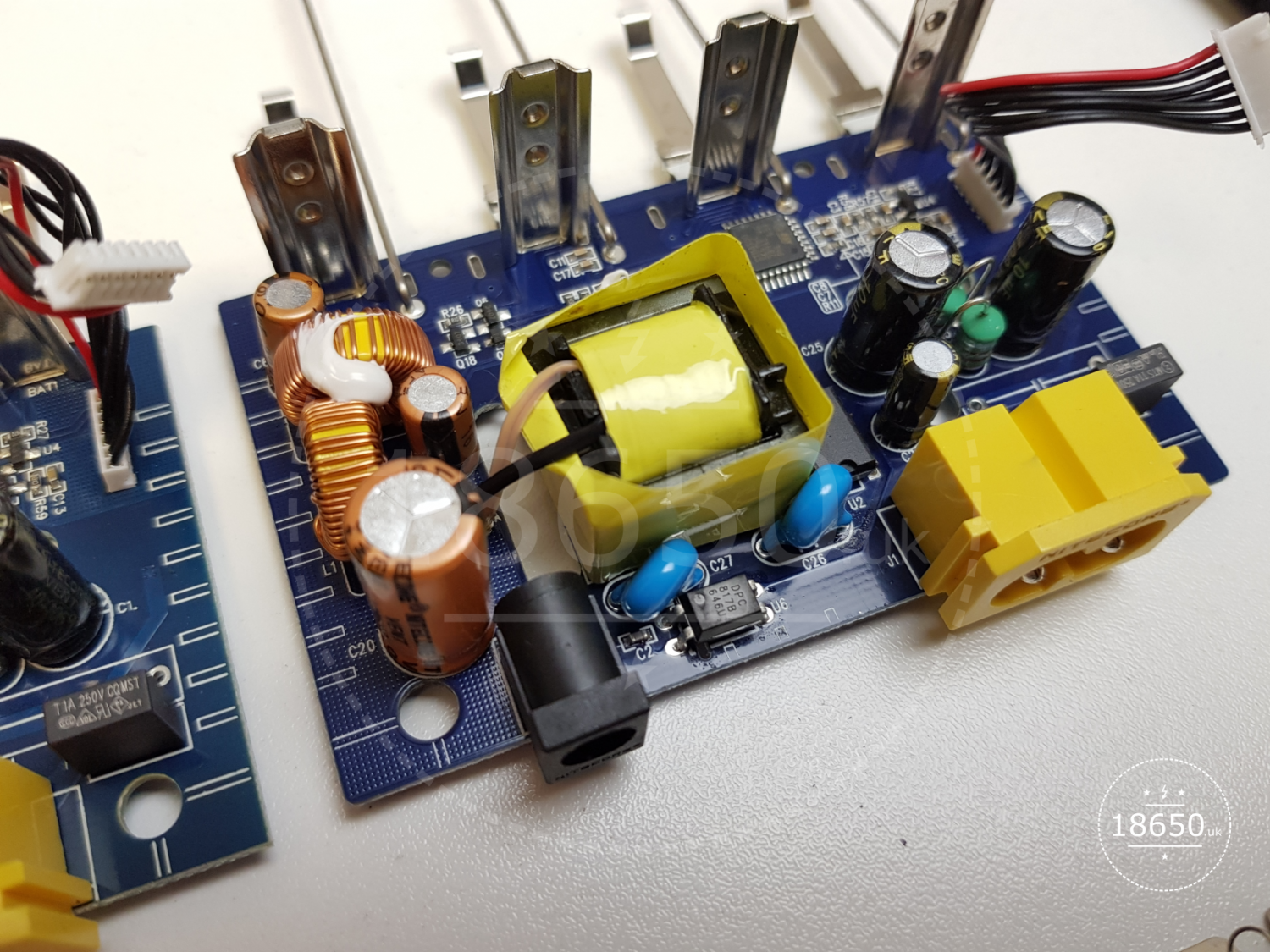 I was keen to look closely at the power input ports. Previous fake chargers had a yellow rectangular 240v input, missing the signature Nitecore branding. These new fakes have finally started using a component that looks pretty much identical. Initially i wondered if there was a possibility that these fakes have been produced with at least some genuine parts. It's happened before in China. Run the factory in the day for the original manufacturer, run it at night for yourself and knock them out cheap. Same tooling, mostly the same components, cheaper price. Looking very closely at the two input ports, they're not the same. These are plastic parts cast in mold's and the mold marks are very different and the plastic is very slightly different in colour so I'm confident in saying these aren't the same. They're a very good replica.

Bottom line. In my experience and looking at the differences in these products this is not an internal product evolution at Nitecore. These are almost certainly counterfeit products, potentially with some input in the way of knowledge/know how/components from the genuine Nitecore business. How it came about we can't speculate but we hope that at the very least, this post will serve to help people recognise these products when they land on our shores, and steer well clear of them.

As always, if you have any questions relating to the above, please drop us an email - hello@18650.uk